Reflecting on the Commission’s conclusion that “the AIFMD is generally meeting its objectives and that the EU-wide harmonisation of regulatory standards has facilitated integration of the European collective investment fund market”, Pat Lardner, Irish Funds CEO, commented:

“We support the Commission’s targeted approach to the AIFMD review. We also welcome greater supervisory convergence as a key enabler of the further development of the EU’s single market for investment funds, ensuring consistent AIFMD application and the highest standards of investor protection.”

In February 2021 Irish Funds responded to the European Commission’s evidence based AIFMD consultation and recently published a position paper on delegation under AIFMD, outlining the benefits to investors.

Mr Lardner went on to add: “Irish Funds also supports the stated ambition for a harmonised approach around Loan Origination Funds and the availability of Liquidity Management Tools applied consistently across the EU. We ask the co-legislators to maintain stability in relation to the AIFMD framework during the upcoming legislative debate to facilitate the objectives of the Capital Markets Union and an investment led recovery.” 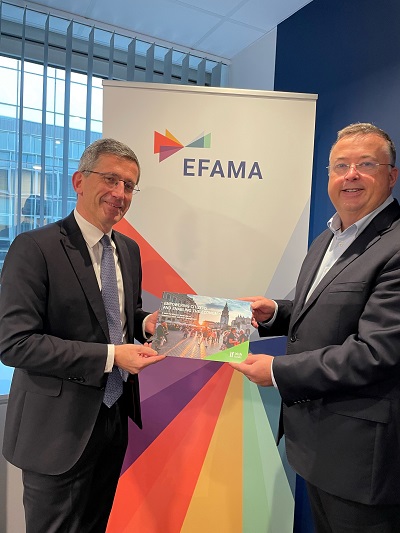 Mr Lardner was speaking at the launch of Irish Funds’ new Empowering Citizens and Enabling the Economy report which examines the role of the fund and asset management industry in Ireland in contributing to the financial well-being of EU citizens and to ensuring a sustainable investment led recovery in Europe.

Based on research into extensive data provided by the Central Bank of Ireland, the report identifies how the asset management industry empowers citizens to protect their financial future, fuels Europe’s economy and contributes to the EU’s sustainable finance future.

The report reveals that €1 trillion of assets in Irish domiciled funds are invested into the EU, with €439bn invested in EU debt instruments, €431bn invested in EU equity and €172bn invested in other EU assets, showcasing the role Ireland’s asset management industry plays in the wider European economy.